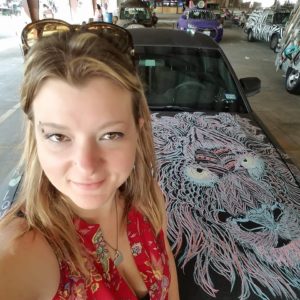 ena Ashley, a native Houstonian, graduated from Sam Houston State in 2006, with a BFA, double major, in Advertising Graphic Design and Photography. She worked as a graphic designer until October of 2013. She then decided to finally take the first step at being an artist and showed at her first Art Crawl at the Atelier Jacquinet November of 2013, in January 2014, Vena received “Best of Show” at a 007 themed show…  she has been showing and producing art ever since!
One of Vena’s artistic passions is photography, and she takes it to another level… for her, most of the time, a simple print just will not do! She calls her process photographic mixed media. All of the mixed media prints are done by hand, so each piece is totally different and unique! The 7-step process of transferring her images to wood and metal, take the viewer to another time and place.

She also loves to paint. She has done several murals and commissions including a mural in Minute Maid Park for Montejo Beer, Hot Toppings Pizza mural, a mural at Tea + Art in the Heights, and a mural of Stella Artois at The Silos. She helped with the painting during the remodel of RockStar Property where she learned how to paint with epoxy.

When she is not working on her fine art, she will most likely be found at clients homes faux painting. She has about 7 years experience under her belt, and is now taking on jobs of her own! Learn more here!